EVPL and libraries across the country recognize Native American Heritage Month every November.

EVPL and libraries across the country recognize Native American Heritage Month every November. The push to have a day of recognition in the United States began in the early 1900s, but it was not until 1990 that President George H.W. Bush approved November as Native American Heritage Month. Just east of Evansville, Angel Mounds State Historic Site has preserved the history of Native Americans in the area. Angel Mounds educates visitors on the Middle Mississippian community and culture that livedon the site between 1000 and 1450 A.D. Below are books and resources to learn more about Indigenous peoples of North America. Angel Mounds – “Located on the banks of the Ohio River in southwest Indiana, Angel Mounds State Historic Site is one of the best-preserved, pre-contact Native American sites in North America. Built between A.D. 1000 and 1450, the town was occupied by more than 1,000 people who were part of the Mississippian culture, and included earthen mounds built to elevate important buildings.”
Indiana Department of Natural Resources: Indigenous Peoples in Indiana

Books for Teens
A Snake Falls to Earth by Darcie Little Badger
Apple in the Middle by Dawn Quigley
An Indigenous Peoples’ History of the United States for Young People by Roxanne Dunbar-Ortiz ; adapted by Jean Mendoza and Debbie Reese
The Things She’s Seen by Ambelin and Ezekiel Kwaymullina

Books for Adults
Braiding Sweetgrass: Indigenous Wisdom, Scientific Knowledge and the Teachings of Plants (eAudiobook) by Robin Wall Kimmerer
There There (Audio CD) by Tommy Orange
The Heartbeat of Wounded Knee: Native America from 1890 to the Present by David Treuer
The Night Watchman: A Novel  (eAudiobook) by Louise Erdrich

Participate in EVPL’s Native American Heritage Month Beanstack Challenge until November 30. This program is designed for all ages and encourages reading and learning about the Indigenous peoples of the U.S.

Be sure to check out the materials talks found on EVPL’s Facebook. 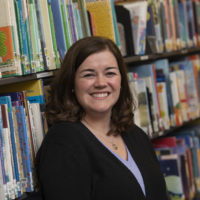 Erika is a cardigan-loving Hufflepuff that enjoys the Cubs, reading, and walks with her husband.